Mortgage applications increased 2.8% for the week ending Aug. 6, and there are signs that at least some first-time homebuyers are finding opportunities despite high home prices.

Ten-year Treasury yields rose slightly at the end of last week after the July jobs report exceeded expectations. That was enough to drive mortgage rates up slightly to 2.99%. Rates have struggled to surpass 3% for most of this year.

“Mortgage applications rebounded last week, including an increase in purchase applications for the first time in nearly a month,” said Joel Kan, MBA’s associate vice president of economic and industry forecasting. “Rates slightly rose but remained below 3%, driven by an end-of-week increase in the 10-year Treasury yield following the positive July jobs report.”

Last Friday, the U.S. Labor Department announced 943,000 new jobs were added in July, exceeding the forecast of 865,000. It was the highest month-to-month growth since August of 2020.

With low rates and heightened concerns surrounding the Delta variant, many homeowners are electing to refinance. For the first time since February, refinance activity reached half of all mortgage originations, according to the latest report from Black Knight. 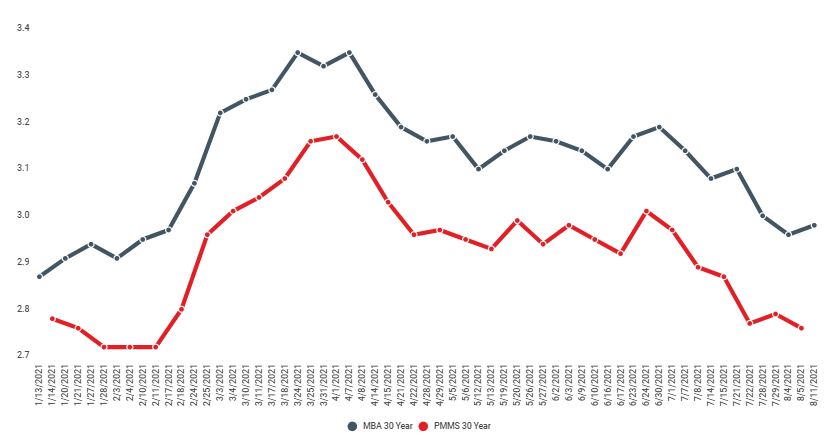 The average 30-year fixed-rate mortgage slipped back down to 2.77% for the week ending August 5, according to mortgage rates data released Thursday by Freddie Mac's PMMS.

The week prior, mortgage rates had rebounded slightly to 2.80%. According to Sam Khater, chief economist at Freddie Mac, concerns over the COVID-19 Delta variant, along with lower 10-year Treasury yields, have resulted in lower rates.

“With global market uncertainty surrounding the Delta variant of COVID-19, we saw 10-year Treasury yields drift lower and consequently mortgage rates followed suit,” said Khater. “The 30-year fixed-rate mortgage dipped back to where it stood at the beginning of 2021, and the 15-year fixed remained at its historic low. This bodes well for those still looking to refinance, renovate or even purchase a new home.”

Mortgage rates have stayed stubbornly low, barely exceeding 3%, defying predictions that 2021 would bring a return to higher levels. Economists and investors are waiting for any indication that the Federal Reserve may begin tapering its asset purchases.

But the central bank has not indicated that it will change its $120 billion in monthly purchases of U.S. Treasury bonds and mortgage backed securities, at least until substantial further progress is made in the labor market.

Price fluctuations in some goods, such as lumber, have fueled concerns that inflation will be more widespread. Federal Reserve Chair Jerome Powell has called the price increases transitory, noting that they are limited to certain segments of the economy.

In a HousingWire Daily podcast, Ajita Atreya, a senior economist at Freddie Mac, said she agreed with that assessment.

“We’re in the camp that believes the inflationary pressure that we’re seeing now is transitory, but definitely something that we should be watching out for, because that’s going to have a major implication in the housing market, and especially if the Fed decides to correct it,” said Atreya.

Despite the Fed’s continued accommodative stance, the housing market is showing signs of cooling.

Mortgage applications tracked by the Mortgage Bankers Association fell 1.7% in the week ending July 30, in spite of the 30-year fixed rate falling to its lowest level in roughly six months.

Mike Fratantoni, MBA’s senior vice president and chief economist, said the decline in mortgage applications can be attributed to the market’s assessment of the latest COVID-19 delta variant.

“Thirty-year mortgage rates dropped below 3% in our survey for the first time since February, presenting an opportunity for many homeowners who have not yet refinanced to lower their rate and payments,” Fratantoni said. “Refinance application volume slightly decreased following an 11% jump last week, and purchase application volume decreased again, reflecting the ongoing lack of inventory that continues to drive rapid home-price appreciation across the country.”

But the low rates made little difference in the purchase market, as home prices continue to rise. The seasonally adjusted Purchase Index decreased 2 percent from one week earlier, the MBA reported.

Home prices increased across the board in May, leaping 16.6% annually in the latest S&P CoreLogic Case-Shiller National Home Price Index report, marking the 12th consecutive month of accelerating prices.

“A month ago, I described April’s performance as ‘truly extraordinary,’ and this month I find myself running out of superlatives,” said Craig Lazzara, managing director and global head of index investment strategy at S&P DJI. “We have previously suggested that the strength in the U.S. housing market is being driven in part by reaction to the COVID pandemic, as potential buyers move from urban apartments to suburban homes. May’s data continue to be consistent with this hypothesis.”